Thankyou so much for allowing me the experience of a lifetime."
remark from a concert-goer in England 2013 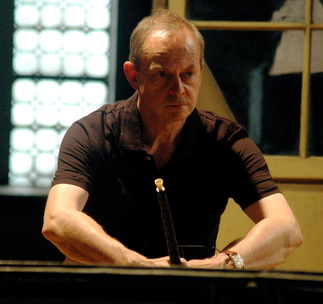 JEREMY WEST  is an evangelist for the cornett, the often-overlooked wind instrument which was held in the highest possible regard during the 16th and 17th centuries. He continues to play a lead role in re-establishing this instrument as a recognised and accepted virtuoso and ensemble instrument and now has thirty-five years of top class playing and recording experience with many of Europe's leading renaissance and early baroque ensembles. Jeremy has on several occasions been acclaimed a “pioneer” of his instrument. He is a founder member of His Majesty's Sagbutts & Cornetts – the leading ensemble of its kind – and is Principal Wind Player with the Gabrieli Consort and Players for their earlier repertoire. He has more than 60 recordings to his credit.

In addition to a playing career which has taken him to more than 30 countries, since 1991 Jeremy has directed the instrument-making workshops of the late Christopher Monk. The workshops are devoted to the research, development, reproduction and world-wide distribution of all instruments in the cornett and serpent families. Examples of the workshop’s output, and in particular the extraordinarily popular resin cornett – an instrument which has inspired and enabled the majority of today’s players – may be found from New York to New Zealand, Scandinavia to South America.

In 1995 Jeremy wrote How to play the Cornett with Susan J. Smith (University of Cambridge). This is the first comprehensive tutor, written in modern times, for cornett players of all levels and it has sold more than 1000 copies worldwide.

Jeremy West is professor at the Guildhall School London, and Musician in Residence at Girton College, University of Cambridge. In his spare time he plays for the City of Cambridge Brass Band and Stanhope Silver Band (Eb Horn - another overlooked brass instrument about which he is passionate), amidst spells of skiing and tractor driving. He lives with his partner, Susan Smith, between Cambridge and Weardale, County Durham.
A to Z
Jeremy has played at, for, in, on or with all of the following and many more…Athens, BBC radio, tv & Proms, Canterbury Cathedral, Deutsche Gramophon, Edinburgh Festival, Festspielhaus Salzburg, Granada, Hong Kong, Israel, Sir John Eliot Gardiner, King's College Cambridge, Lufthansa Festival London, Melbourne, New York, The Orient Express, Perth (Australia & Scotland), Queen's University Belfast, Sir Roger Norrington, Sydney Opera House, Taipei, University of California, Venice, Westminster (Abbey & Cathedral), EX Cathedra, York Minster, Zaragoza