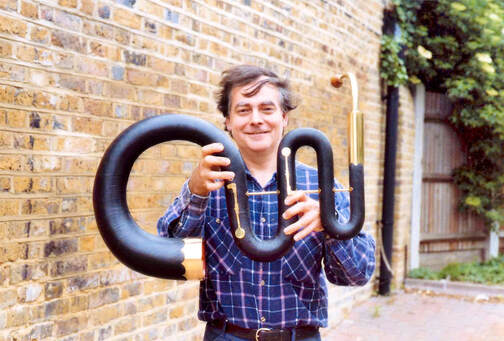 with the first military serpent, outside our workshops in New Cross, London SE, c. 1993
​Keith  Rogers, cornett, serpent and oboe maker at Christopher Monk Instruments (CMI)
​died on the 21st January 2008 after a lengthy struggle with pancreatic  cancer


Following a career in teaching, which culminated in the positions  of Director of Music at two leading Northern Ireland grammar schools, as well  as spending several years as a recorder maker, Keith joined the Christopher  Monk workshops in April 1992. Here, in partnership with the cornett player  Jeremy West, and succeeding the late Christopher Monk (founding father of the  cornett and serpent revivals), Keith spent the remainder of his life making  copies of historic wind instruments. Building on his skills and experience as a recorder maker, he quickly adapted to the demands made by “all instruments that  wiggle” (as they are affectionately known at CMI); instruments which are  demanding on both player and maker alike. Using the treasuretrove of clues and  evidence extant in Christopher Monk’s own workshop, Keith picked his way through this mysterious and vexing labyrinth. But it was his unique mix of  powerful intellect and enviable manual dexterity that enabled him so  successfully to create fabulous wind instruments. Examples of his work live  (and play) on and may be found across the world from New York to New Zealand,  Aberdeen to Argentina.

An experiment to make an oboe da caccia using the same methods  employed to manufacture a serpent, lead to a lasting partnership with leading  oboe player and authority, Dick Earle.  A da caccia (eventually built in the traditional way rather than using  the method above), along with several models of historic oboe, became available  as a result. For more than a decade these beautiful instruments have been sent  to appreciative players from five continents.


Keith Rogers was born and brought up in Sussex; he studied music  at the University of Wales at Bangor (BA Hons 1st Class 1965), lived  in Belfast, then in London and, most recently, in rural Norfolk. He is survived  by his wife, Kathryn, four daughters and six grandchildren.